On January 11 Secretary of the Interior Sally Jewell announced that she has approved expansion of the Balls Bluff Battlefield National Historic Landmark from its current 76 acres near Leesburg to include more than 3,300 acres of pristine riverfront land on both sides of the Potomac River and including Harrison Island, Maryland.

The approval of this distinct and high honor recognizes both the significant events which occurred here in late 1861 and the beauty of this well-preserved stretch of the river between Whites Ferry and Edwards Ferry. National Historic Landmarks (NHLs) are nationally significant historic places designated by the Secretary of the Interior because they possess exceptional value or quality in illustrating or interpreting the heritage of the United States. Today, just over 2,500 historic places bear this national distinction.

This project was initiated five years ago by the Loudoun County Heritage Commission to recognize and honor the historic and beautiful land along Edwards Ferry Road and along the Potomac shores near Leesburg and to expand the battlefield from its current small 76 acres to include more than 3300 acres in which important battle events took place.

This painting showing the Federal bombardment of the Balls Bluff Battlefield from across the river in Maryland hangs in the White House. The land depicted is close to Edwards Ferry Road and is now within the expanded boundaries of the National Historic Landmark.

The Commission sought and gained financial support via a grant from the American Battlefield Protection Program which was used to hire a team of consultants led by Rivanna Associates of Charlottesville. Heidi Siebentritt, of the County Planning department, successfully managed the consulting team and the project through production of a well-researched report, development of carefully defined boundaries for the expanded area,  multiple levels of review and approval by the Federal government and multiple meetings and communications with affected landowners and organizations.

Thanks are due to the many organizations and individuals who provided visible and written support to the project as it moved through this complex and lengthy process of approval. Among them are LCPCC member organizations: the Loudoun Heritage Commission, the Mosby Heritage Area Association,  the Piedmont Environmental Council, the Unison Preservation Society, the Friends of Balls Bluff, the Northern Virginia Regional Parks Authority, and the Journey Through Hallowed Ground Partnership. The Land Trust of Virginia also provided support for this project.. 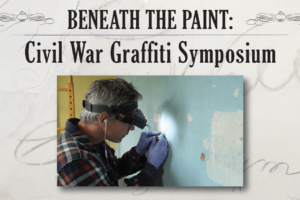 Learn about the history and preservation of Civil War graffiti[...]