Many thanks to all Loudoun Coalition Member Organizations who provided input to the Loudoun 2019 Comprehensive Plan effort.

Almost 80,000 residents throughout the entire County were represented by the input from numerous Coalition organizations and all seven Mayors of the Coalition of Loudoun Towns (COLT).  The input in the form of a “pick this, not that” matrix was delivered to the Board in April, along with a binder of key information for each Supervisor to reference during their worksessions that included the public’s priorities, chapter summaries and recommendations, and explanation of financial impacts.

At the June, Loudoun 2019 Comp Plan final adoption several Board members acknowledged the vital information and assistance provided by the Coalition, with the result that the Coalition has been asked to be a reviewer for the next phase: the 2021 Zoning Ordinance Rewrite (ZOR). 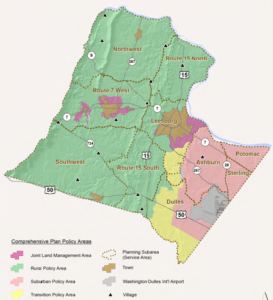 The Loudoun County Preservation and Conservation Coalition set up a New Comprehensive Plan Review Committee in 2016 to follow, analyze, and comment on the Envision Loudoun process. The committee consists of a team of 15 representatives from the LCPCC member organizations with a wide range of expertise. This committee has reported to the full Coalition at regular monthly meetings.

The May 7, 2018, draft Loudoun 2040 General Plan was thoroughly reviewed by the committee with the intent to work constructively with the draft as a starting point, supporting its recommendations as fully as possible when consistent with the Coalition’s shared views.  The October, 2018 revised Envision Loudoun 2040 draft was reviewed in detail, as well as the most current March 13th version, which can be found HERE. 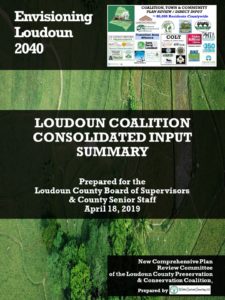 “All On Board” to give input to Board of Supervisors.

The Board of Supervisors officially received the Planning Commission Comprehensive Plan draft on March 21st.  The Board will conduct a series of work sessions and two Public Input meetings and is required by Virginia Code to “take action” in 90 days.

A full calendar of meetings can be found HERE 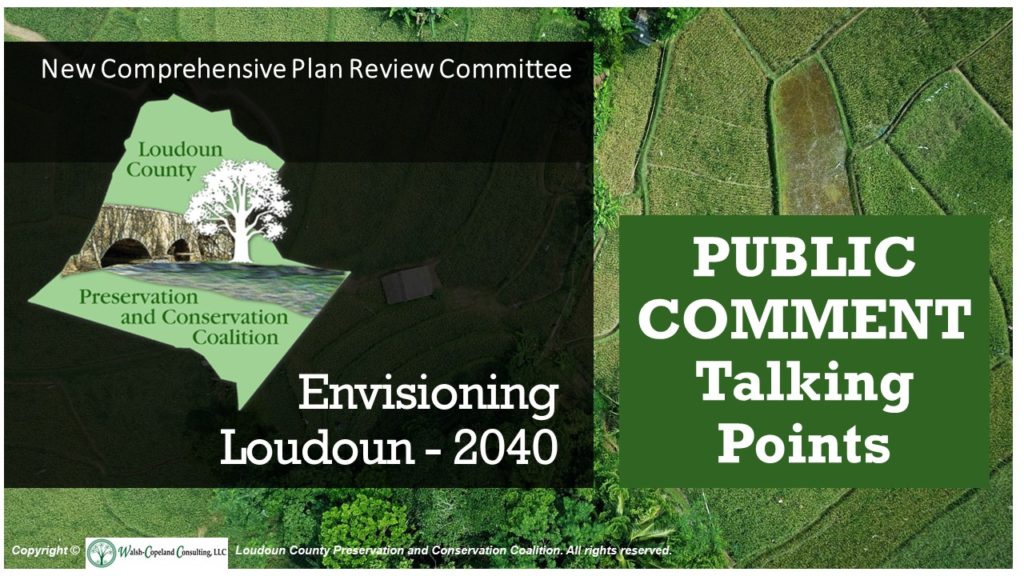 Coalition Members should prepare remarks based on their primary area(s) of concern.

To assist, a PUBLIC INPUT TALKING POINTS summary has been prepared based on the information the New Comprehensive Plan Review Committee is providing to County Staff and each Supervisor during meetings in March and April.

The talking points highlight eight areas of concern, with specific actions for changes in the draft plan and supporting fiscal analysis information.  Members may select the issues/actions of highest concern to create 2 minute remarks. 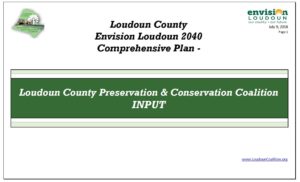 LCPCC Position on the Revision of the Comprehensive Plan February 2016 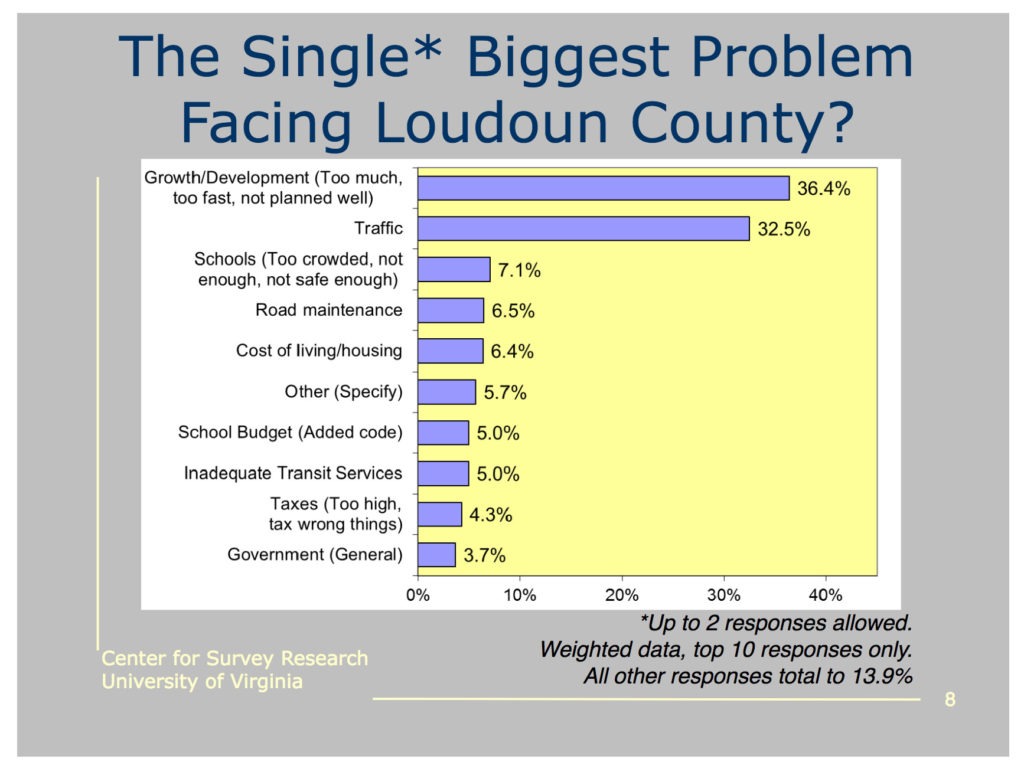 From 2016 UVA survey of public opinion

Citizens strongly and clearly have stated in a University of Virginia survey and two “Envision Loudoun” public input sessions that overdevelopment and congestion are their chief concerns, and that they want more parks and protection of Loudoun’s natural and rural areas. There are currently nearly 30,000 approved but unbuilt houses in the county, already inadequate funding for road improvements, and no strong protections for the rural or transition areas.

In order for those citizen priorities to become reality, the comprehensive plan’s policies must be specific, with measurable goals and time frames for achieving them.  Following the dismissal of the Stakeholder’s Committee, the Coalition remains committed to ensuring that citizens’ priorities for a fiscally prudent and sustainable plan are reflected in the final document.

There are no upcoming events at this time.